A Yoga Retreat for the Time-Poor 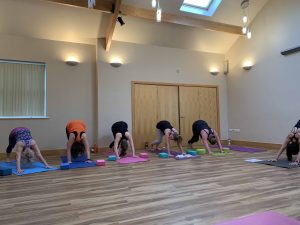 I have often thought that those lucky people who get to indulge in yoga retreats have plenty of spare time, spare cash and are already super bendy. For none of those reasons, I desperately want to go on a yoga retreat. The idea of having more than a few minutes to myself whilst improving my health and wellbeing sounds indulgent and delightful.  With with three young children, a full-time job and a whole bunch of other commitments, the idea of going on one anytime soon seems a little out of the question, however, the concept of a “1-day retreat” sounded actually feasible and less cumbersome on those people around me that would need to pick up childcare logistical duties if I was to sign up for a full day of me-time.

To my rather stressed-out, time-poor self a day of yoga sounded blissful. It wasn’t until after the childcare logistics were arranged and the reality of it dawned upon me when I realised I hadn’t signed up for a day at a health spa lying by pool-side being fed healthy snacks, but instead I had willingly decided that I would participate in 4 hours of actual yoga (plus time in between for refuelling and a discussions about nutrition and female hormone balancing).  The refuelling and

discussions sounded delightful and the thought of me congratulating myself after completing 3 yoga classes in one day was appealing, but actually withstanding 4 full hours of yoga?! I sometimes struggle to get through a 1-hour class. What was I thinking?

Was I strong / fit enough?

I’ve flirted with yoga on and off for the past 20 years or so, but must admit it’s far from the daily, or often even weekly practice that I would love it to be. After a yoga session I always feel so much better both mentally and physically, yet I haven’t managed to prioritise it enough to make it a regular routine. I also know I’m not at my most bendy or strongest at the moment, so when I contemplated the reality of 3 classes in one day I decided best not to think about it too much and just show up. I could always leave if it got too much right?

After shedding my coat and bulky outer layers I was very relieved that the room was a very comfortable temperature despite the somewhat Baltic conditions outdoors. A quick scan of the room showed a friendly bunch of women of various ages and a light chatter of lines echoing my own thoughts “I hope I can last the full day, I’m not at my bendiest” etc. My slight worries of being thought of as a complete novice compared to a room full of advanced ashtanga buffs was thankfully unfounded and the room was filled with likeminded women of various abilities who all had gathered and taken the time out of their lives to press pause and reset. Most of us were there because we wanted to get inspired and encouraged to deepen our yoga practice (or get back into it) and learn more about healthy nutrition that can support female hormones and digestive systems. A holistic approach to self-care with the guided expertise of yoga instructor and nutritionist Sarah Kekus. 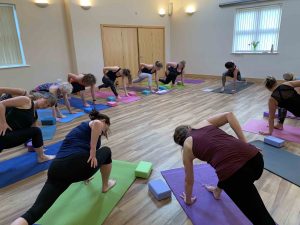 The first session was Liquid Flow Wave 1. A two-hour yoga session aligning movement with breath which then built up into long sequences in continuous flow.  At the end of this two-hour session I was a shaky sweaty heap but did actually really enjoy it and must admit it didn’t feel like a full 2 hours had passed by. The variety of poses, rhythms and reminders to move with the breath helped keep me in the moment rather than worry about how much longer I had to go. At the end of this two hours I did feel like I had given everything I had and was now rather worried that I my fears of not being able to complete the day may be a real concern. Thankfully Sarah addressed this thought that had been expressed to her by many at previous events at this exact time on the course and promised us that a 30min comfort break with some delicious herbal teas and light heathy snacks would reset us and give us strength and vigour for the next 55min yoga session (although I was again slightly worried when she mentioned that the next yoga session would be more intense!) 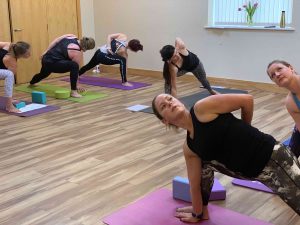 Thankfully while I did feel “the burn” and have to get my grit on in a few of the poses, I actually found the next Liquid Flow Wave 2 session to be even more enjoyable than the first and as promised, the time flew by yet again. Honestly, I don’t know how this happened because I am a bit of a clock-watcher when I’m having to endure anything other than yin yoga and I genuinely was surprised when we had made it through to my favourite position, shavasana (or dead body pose). 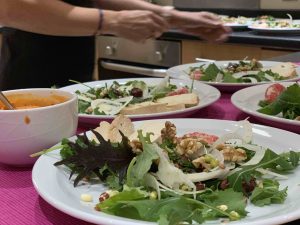 The well-earned lunch looked far too healthy to be satiating, but to my surprise it was both tasty and filling. Considering I’ve never been a huge fan of tofu and like to have a rather substantial lunch (even when I’m not working out) I was amazed at how this nutritious simple lunch of seasonal plant-based goodness including; salad leaves, sprouted beans, walnuts, tofu and other tasty additions of 100% natural dairy-free, meat-free, gluten-free dish could be both delicious and keep me going ready for yet more yoga. I am starting to think that perhaps reducing my dairy, gluten and meat intake wouldn’t be quite as hard as I had imagined. I also thought how nice it felt to not feel hungry, but also not feel bloated or sluggish after my lunch – which leads nicely onto the nutrition discussion that followed.

I’ve read quite a few of Sarah’s blogs about nutrition and drooled over some of her recipes, but to be completely honest I haven’t really put much effort into making any significant dietary changes to my lifestyle, other than reducing the amount of alcohol I was consuming that over time had slowly crept up without me really realising it.

One of the reasons I hadn’t cooked any of Sarah’s recipes is because I had never put aside any time to actually plan to buy the necessary ingredients (I’m one of those last-minute eaters who raid the fridge/pantry when hungry without really forward planning my meals) and partly because I don’t think I truly thought there was that much wrong with my fairly healthy diet.

However, being taught more about how our body processes various substances and how they affect female sex hormones, our mood and our wellbeing was quite an eye opener. Sarah’s in-depth scientific knowledge of nutrition and the human body is clearly extensive by the way she was able to clearly and easily explain quite complex scientific processes into understandable layman’s terms, coupled with her passion for wellness through natural diet – her enthusiasm for health and wellbeing was infectious! 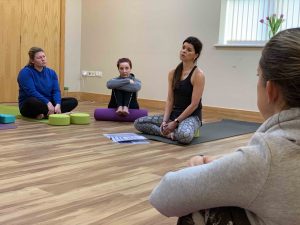 The discussion helped me understand why it is often quite hard to change certain bad habits and also left me feeling empowered about how I could make positive changes that would make a real impact on my health and wellbeing. She neatly summed up some of the negative effects that many (including myself) experience but that we probably didn’t even realise were due to diet, such as the 2pm slump I often notice daily which is likely to be the cause of imbalanced blood-sugar levels and also the sometimes waking at night in a hot sweaty mess (also caused by stimulants such as caffeine, alcohol and excess sugar) and the same with skin inflammation.  Sarah wasn’t out to villainise any foods or make us feel bad for any less than perfect diet choices, but she wanted to shed a light on what we could do take the metaphorical bull-by-the-horns and improve the actual causes of some common symptoms, rather than take the less effective “ambulance at the bottom of the cliff” approach of medicating the end cause without addressing why they were happening in the first place.

I felt encouraged to make some tweaks to my diet such as aiming to reduce my addiction to coffee and minimising the sugary foods I eat (especially in the afternoon when that afternoon slump hits!) I also found it interesting that we may need to wait a good 90 days to see the full benefits of dietary change, so giving up after a week or two, because we haven’t noticed a difference, is not giving the changes a fair chance to prove their effectiveness.

Armed with some nutritious recipes that even the most novice of cooks (I include myself in this category) can attempt – along with a very helpful guide of food/fridge/pantry staples I felt the most positive I have felt in a long while that improving my overall diet and wellbeing was something I could take the driver’s seat in (rather than as a passenger at the mercy of unpredictable energy, mood and hormone levels). 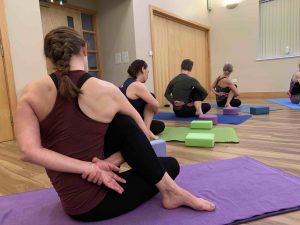 After our light lunch digested (while we were mentally digesting the nutrition discussion and talk) it was time for some restorative yoga to bring the session to a close. A gentler paced “Ebb and Flow” session allowed us to move more deeply into poses to create space to turn our thoughts inwards.  Sarah reminded us that with the year ahead of us, it was the perfect time to renew our commitments to ourselves, guided by intrinsic nature or our “inner guru”.

The retreat was over before I knew it after a gratitude affirmation and farewell, but not before we were gifted with a delightful goodie bag each, brimming with absolute treats such as Sarah’s essential oil doTerra cleaning spray (helping us to eliminate household toxins while keeping the house clean), the latest copy of Om Yoga magazine, a luxurious eye pillow for mediation and a sample pack of MegaMag Fem Balance to support hormone balance in women.

Not only did I leave feeling thoroughly stretched, challenged, encouraged and inspired, I also left with some newly made friends from the group and a strong sense of empowerment.  I had no idea that so much could be achieved in just 1 day! I can only dream about what could be achieved on a longer retreat and think I might need to book one of those in with Sarah just as soon as I can sweet-talk my husband and in-laws etc to do without me for a few extra days! 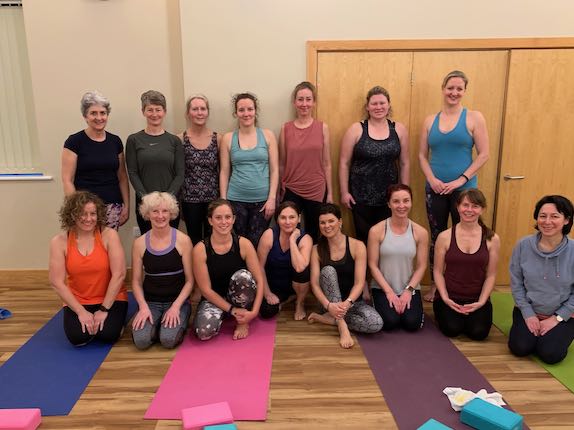